Throughout its history, Nevsky Prospect has been a sort of lawless area of liberalism and freedom away from the dominion of imperial power. The boulevard was home to an unlikely coexistence between the wealthy nobility and those living in extreme poverty, bohemians, prostitutes and their clients, and poor artists and artisans.

This feverish lifestyle was obviously worthy of being immortalised in literature, and Nevsky Prospect features heavily in the works of artists like Gogol, Tolstoy and Dostoevsky.

What to see on Nevsky Prospect

The avenue stretches over two and a half miles (over 4 km) from Admiralty in the west to the Moscow Railway Station, and then slightly south to Alexander Nevsky Lavra, the monastery after which it is named. It is home to many of St Petersburg's most important monuments, as well as numerous shops, cafes, restaurants and museums.

Amongst the many different churches along the boulevard, we suggest making a stop at Kazan Cathedral. This enormous cathedral, modelled on St Peter's Basilica in Vatican City, is one of St Petersburg's most important churches and the view of its neoclassical colonnade from Nevsky Prospect is one of the symbols of the city. Across the road from Kazan Cathedral, you'll have a view of the iconic Church of the Saviour on Spilled Blood. Located a five minute walk from Nevsky Prospect, this is one of the city's must-see landmarks.

If you'd like to see the best of the boulevard and ensure you don't miss any of its monuments, while learning fascinating facts about its history, take a look at our Guided Walking Tour of Nevsky Prospect.

Nevsky Prospect is the most popular avenue in St Petersburg and one of the most pleasant places to stroll and enjoy the grandeur of the city while taking in the lively atmosphere. 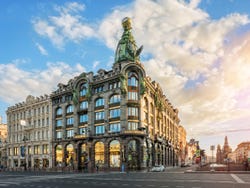 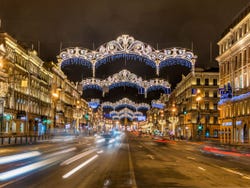