Buses are a convenient way to get to places in St Petersburg that the metro network doesn't reach, as their extensive routes connect most places in the city. However, there is very little signage in English, so unless you speak Russian, it can be quite daunting to catch the bus and know where to get off. To use the bus, trolleybus and tram networks, you get on board and pay the conductor the 40 Rouble fee.

One bus route that you may find convenient if you're travelling on a budget is the shuttle bus to and from the airport, and in each of our guides to the city's main monuments and attractions, we've included the best way to travel there, including the most convenient bus lines to catch if relevant.

The first bus lines were opened in St Petersburg in 1907, connecting the city's two main railway stations. During the course of the city's history, like during the Russian Revolution, bus services have been suspended, but throughout the past century the network has expanded massively. Nowadays, there are more than 3000 vehicles operating on 200 different routes, transporting more than a million passengers each year. 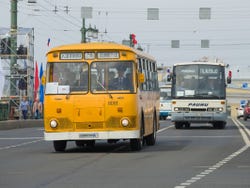 Getting the bus in St Petersburg 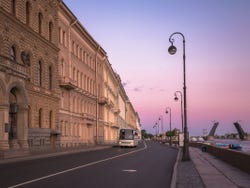