The mansion originated in 1717 as a summer palace for Catherine I, wife of Peter the Great, however the original building was demolished and replaced by Catherine's daughter Empress Elizabeth, who found it outdated.

Elizabeth commissioned her much larger and grander palace to be built in Rococo style, and both the interior and exterior became synonymous with luxury and keeping up with the newest, most fashionable designs. After Elizabeth's death, the palace was abandoned by subsequent monarchs who chose to live in the nearby Alexander Palace instead, but it remained a monument to Catherine's glory and Elizabeth's wealth.

During World War II, when the German Army retreated after the siege of Leningrad, they looted and destroyed the interior of the Catherine Palace, leaving it an empty shell. There are still priceless stolen treasures, especially those of the beautiful Amber Room, that are yet to be located.

The tour of the palace allows visitors to travel back in time through the history of Russia, bearing witness to the opulent wealth of the Emperors and Empresses and the fashions of their time. Among the most striking of the lavishly furnished rooms are the luxurious Throne Hall, a meticulously decorated space decorated in which the most important celebrations took place, and the impressive ballroom, a bright light-flooded room where the magic of exclusive parties can still be felt.

The highlight of the visit to the palace is the reproduction of the spectacular Amber Room, a luxurious space decorated with panels and furniture made of amber, a material that had a price twelve times higher than gold when the palace was constructed.

The private royal chambers, various dining rooms, offices and numerous elegantly decorated rooms complete the tour of the palace. Outside, the gardens are equally magnificent, as they are decorated with beautiful fountains, palaces, pavilions and landscaped areas.

How to get to Catherine Palace?

Tsarskoye Selo in Pushkin, where the palace is located, is over an hour's drive, or an hour a half by public transport, from central St Petersburg. The best way to get to Catherine's Palace is to book a tour from St Petersburg. This way you don't have to worry about the many changes on public transport and you won't have to wait in the long lines to buy tickets. You can book our day trip to Pushkin and Catherine Palace here.

Like the Hermitage Museum and Peterhof Palace, the spectacular Catherine Palace is one of St Petersburg's must-see sights. It's worth noting, however, that due to its great beauty and historical importance, the palace receives countless visitors during most of the year, so visits can feel rushed and crowded. 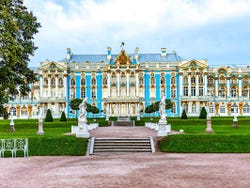 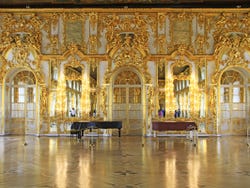 Wednesday to Monday: 10 am to 6 pm.
Closed Tuesdays.