Located on an island in the Neva River is one of Russia's most emblematic and historically significant ramparts: the Peter and Paul Fortress. Discover its legacy on this English-language guided tour. 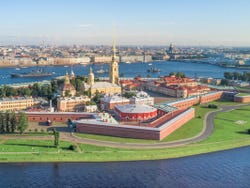 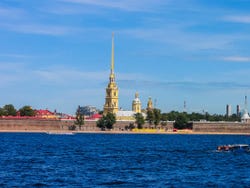 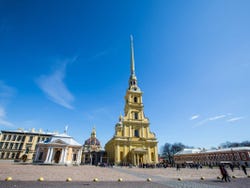 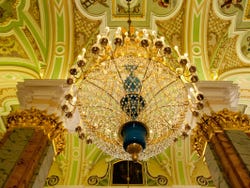 After meeting up at the Gorkovskaya Metro Station in Saint Petersburg, we'll set off on foot towards the nearby Zayachi Island, or Hare Island, a tiny piece of land in the Neva River where the imposing Peter and Paul Fortress is located.

Why did the legendary Tsar Peter the Great choose a small, swampy island to build a large defensive fortress? Our expert English-speaking guide will reveal the origins of the ramparts as we stroll through its impressive walls. You'll hear numerous fascinating stories including how this the bulwark was used as a notorious prison for many years.

Having enjoyed a journey through the 18th and 19th century history of the Peter and Paul Fortress, we'll learn about its role in one of the most significant episodes of the 1917 Russian Revolution. Do you know what historical events took place here?

We'll continue discovering Russian history as we pay a visit to the most important monument within the fortress and St Petersburg's oldest landmark, the Peter and Paul Cathedral. Inside the church, which is home to the tombs of many Russian emperors and empresses, we'll admire its majestic decoration, characterised by pastel tones and lavish gilt details.

To bring our tour to an end, we'll walk around the island, taking in the different buildings of the defensive complex, before returning to our original meeting point.

All of our providers comply with local legislation and applicable health recommendations to avoid the spread of Covid-19. Show more

A safe distance of one metre between clients will be maintained whenever possible.

The use of masks is obligatory. Masks will be given to those clients who do not have their own.

Alcohol gel will be available before, during, and after the service.

All those running the service (guide, driver etc...) will wear a mask throughout its duration.

All those running the service (guide, driver etc...) will wear gloves throughout its duration.

Disinfected radio units will be provided, and headphones will be single-use.

Handing out of printed material such as maps or brochures will be avoided.

The temperature and wellness of all those taking part in the service will be monitored daily, excluding and maintaining in quarantine any who display fever or symptoms.

The transport used will be disinfected before and after each service and deep-cleaned every 24 hours.

Showing your voucher on your phone will be enough, and it is not necessary to print anything.

Alcoholic drinks are not available.

The temperature of all attendees will be taken, and admission will be denied to those with a temperature of more than 37 degrees Celsius (99 Fahrenheit).

Entry to the Peter and Paul Cathedral and prison.

You can book up until 10 hours before the activity as long as there are still places. Book now to guarantee your spot.

Most areas are accessible.

I travelled by myself
10

I travelled with my partner
Show all the reviews
like