Discover the secrets of the city with this St. Petersburg Night Tour. You'll also see the opening of the drawbridges over the Neva River - a real spectacle! 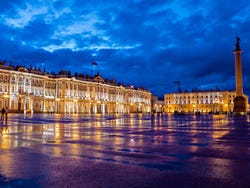 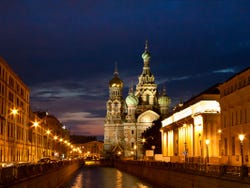 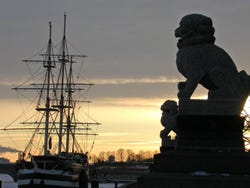 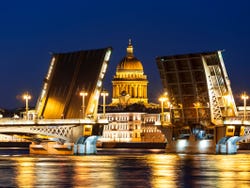 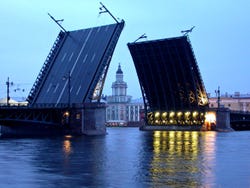 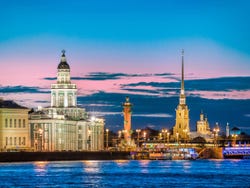 We'll meet at 11:30 pm at Senate Square. If St. Petersburg is a city that shines in the sunlight, its magic unfolds even more at night. Are you ready to witness the beauty of the former imperial capital? Let's start our night tour of the Pearl of the Baltic!

We'll board a bus and take a panoramic tour while revealing curiosities about Russian history and culture. Along the route through the illuminated St. Petersburg, we'll make several stops so that you can take pictures of the spectacular monuments of the city under the moonlight.

The bus will stop at St. Isaac's Square, Ostrovsky Square and the Church of the Saviour of the Spilled Blood. The illuminated facade of the latter will be one of the most beautiful things you have ever seen, and did you know that it is one of the icons of the Russian city skyline?

We'll also pass under the lights of Nevsky Avenue and head towards Vasilyevsky Island, to admire a unique spectacle, the opening of the drawbridges over the Neva River at night.

After admiring this marvel, the tour will end here at 1:30 am.

You can book up until 12 hours before the activity as long as there are still places. Book now to guarantee your spot.

Varies according to the attraction included.

US$ 23.10
No hidden fees or surcharges
Free cancellation up to 12 hours before the service starts
Book

Free! Free cancellation up to 12 hours before the activity starts. If you cancel under this time or do not show up, you will not be refunded.