It's the deepest metro network in the world and it's beautifully decorated... what else will you discover on this guided tour of the St Petersburg metro? 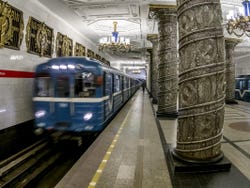 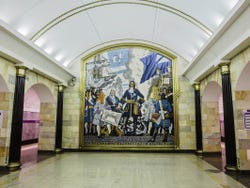 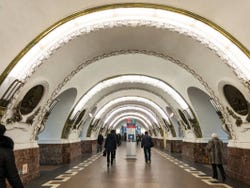 Our English-language guided tour of the St Petersburg Metro will begin at 71 Nevsky Prospekt, next to Mayakovskaya Station. Here, we'll descend into the deepest metro system in the world to discover its fascinating secrets!

The St Petersburg Metro is so much more than just a mode of public transport. Many experts in art and architecture consider the network an underground museum and you'll soon understand why as you visit the palatial stations on our tour. Admire the spectacular mosaic murals illuminated by impressive golden crystal chandeliers as your guide reveals why this elegant decor was chosen. We'll then get to see an unusual type of metro platform known as a horizontal lift... intrigued?

During our tour of the different lines of the St Petersburg Metro, we'll learn some curious legends that surround the transit system, like the existence of an underground city located between the tunnels... science fiction or state secret? You decide!

Maybe you aren't convinced by hidden metropolises, but the "ghost stations" of the metro are historically documented, so there's no denying those! After uncovering numerous fascinating facts about the metro, we'll return to our original meeting point where our tour will come to an end.

Check out a map of the St Petersburg Metro network via the following link. It has the metro stations written in Cyrillic as well as in Latin characters, do you should have no problem finding your way on the day of the tour.

The activity takes place with a guide that speaks in english.

You can book up until 12 hours before the activity as long as there are still places. Book now to guarantee your spot.

US$ 17.70
No hidden fees or surcharges
Free cancellation up to 3 days before
Book

I travelled by myself
10

I travelled with friends
Show all the reviews
like Free

9.20 / 10 816 reviews
The Tzars created a city-palace on the banks of the Neva River. With this free tour of the centre of Saint Petersburg you will discover its stunning legacy.
Free!
Book
like

9.60 / 10 202 reviews
Discover Saint Petersburg and all the hidden corners of this palace city, on a 2-day tour perfectly designed for cruise passengers.
US$ 177.10
Book
like

No rating yet
This hop-on-hop-off tourist bus makes different stops throughout the city, allowing you to enjoy the main points of interest St Petersburg has to offer, in total comfort.
US$ 35.40
Book