Located on Kotlin Island, the historic fortified city of Kronstadt is home to an incredible imperial legacy. Discover its fascinating heritage on this half-day tour from St Petersburg. 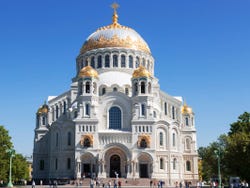 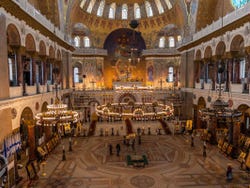 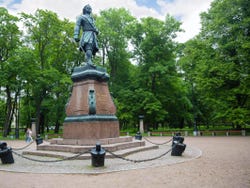 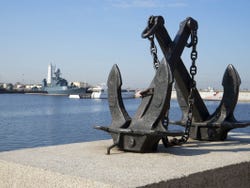 At 10 am on the day of your tour, meet your guide underneath Alexander Column in Palace Square. From this meeting point in the heart of St Petersburg, you'll walk over to a nearby public transport station to catch a bus west to Kotlin Island.

The bus journey, which will take around 60 minutes, crosses the highway which is part of the dam across the Gulf of Finland. Arriving on the Russian island, you'll begin exploring with a guided walking tour around the fortified city of Kronstadt.

The island citadel, which is the main base of the Baltic Fleet of the Russian Navy, has been witness to any number of important historical events, from its foundation by Peter the Great in the 18th century to the volatile period of history between 1917 and 1921. Hear all about Kronstadt's role in the Russian Revolution as you visit some of the city's main sights, including Anchor Square, a monument to famous Russian naval commander Admiral Stepan Makarov.

Reaching the historic heart of Kronstadt, which is a UNESCO World Heritage Site, you'll be captivated by the sight of the majestic Naval Cathedral of St Nicholas. Enter the beautiful Orthodox church to admire the stunning Byzantine artwork up close: the intricate details of the altars and mosaics under the immense dome are particularly striking.

You'll also visit the Our Lady of Vladimir Church, another of Kronstadt's most impressive religious monuments. At the end of your guided tour of the historic island city, you'll take the bus back to St Petersburg, arriving at around 2 pm.

Entrance to the sites visited.

US$ 69.40
No hidden fees or surcharges
Free cancellation up to 24 hours before the service starts
Book

Free! Free cancellation up to 24 hours before the activity starts. If you cancel under this time or do not show up, you will not be refunded.